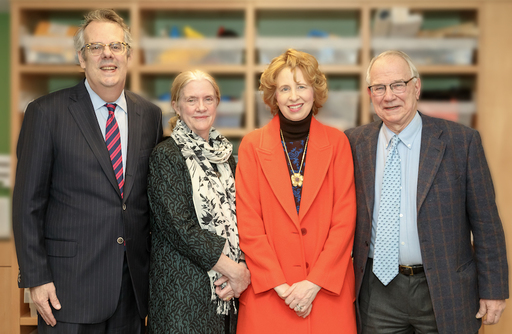 John Wellemeyer's dedication to Princeton Day School and his belief in the transformative power of education have translated into countless hours of volunteer effort on behalf of the School. As an alumnus and past parent (John and his wife Louise have twin sons, Doug '18 and James '18), he has a profound understanding of the School's mission and culture and is committed to its continued excellence.

Since 2012, Mr. Wellemeyer has been a member of the PDS Board of Trustees, where his extensive business experience has been invaluable in his role as Chair of the Investment Committee. Among many other roles, he has served as Class Secretary, Class Agent, Annual Fund Parent Captain, a member of the Annual Fund Leadership Gift Committee and in several capacities on capital campaigns. His service leadership is also reflected in generous financial gifts, which have directly benefited programming across the School, none more so than STEAM curricula.

In appreciation for his many efforts, on March 7, 2019, the School officially named its STEAM space The Wellemeyer STEAM Center. The transformative, 2,000 square foot space is dedicated to innovative, hands-on exploration and real world problem-solving that integrate science, technology, engineering, arts, and mathematics.

Says Head of School Paul Stellato, "In John Wellemeyer, we found an angel who shared our vision of a dynamic student center for STEAM innovation and hub for program development. John's vision of a welcoming facility with robust resources for STEAM exploration is consistent with what his sons experienced at our School and what John experienced when he was here."

Photo above: Senior Giulia Gerschel spoke of the personal impact the Wellemeyer STEAM Center has had on her high school learning experience and the Center's importance to students across the School.

Senior Giulia Gerschel '19, an enthusiastic STEAM scholar, confirms the welcoming and magnetic nature of the Center. "The STEAM Center is always bustling with students, to the point where there is not a time when I walk by that there are no students working there," she observed in her remarks at yesterday's ceremony.

The impact of the Wellemeyer STEAM Center since it opened in 2017 is already clear. The course offerings taking place in the Center serve approximately half the Upper School and have helped contribute to record high re-enrollment. Enrollment of female students in Upper School STEAM electives this year almost doubled, with gender distribution rising to 42% female and 58% male from last year's 27% female and 73% male gender distribution. Female enrollment in the Introduction to Engineering course grew from 17% last year to 48% this year. In addition, more than 28 students earned STEAM-related summer program or internship placements last summer, many at top universities around the country, and 10 students have received university credit for engineering. Elective STEAM course offerings are among the best and most extensive among independent schools in the northeast region.

Giulia underscored the Wellemeyer STEAM Center's value with evidence of its impact on her own experience at PDS. As soon as she saw the newly completed Center in August 2017, "I immediately knew that this would be much more than we ever expected," she noted. Seeing STEAM classes in action in the Center, Giulia continued, "I witnessed how hands-on work was truly integrated into the curriculum in every aspect possible. We have been learning skills vital to what I would like to do in the future, like Solidworks (3D modeling software). My older brother, who works as an engineer, told me that Solidworks is a tool people are usually first exposed to in college and at times, professionals are hired solely due to their proficiency with this software."

"I have very strong feelings about the importance of math and technology and believe there's a critical need for mathematicians and scientists in this country," says Mr. Wellemeyer. "In discussions with leadership, I was anxious to see those disciplines brought up to the level of PDS' exceptional liberal, performing and fine arts programs. With development in the past three years of the STEAM Center and STEAM program offerings, I think we have now done that. In my opinion, this facility is one of the best in the country. In addition, its new curriculum has strengthened and enhanced the School's outstanding educational program overall. My wife Louise and I were delighted to support this important initiative and we are truly honored to have our family name associated with the STEAM Center."

Mr. Wellemeyer has attributed much of his successful academic and career trajectory in engineering and finance to his experience at Princeton Country Day School (predecessor, along with Miss Fines School, to the present-day Princeton Day School). After early childhood years spent in New Orleans, he has never forgotten the transformation in his approach to school and community that he underwent after arriving at PCD. With supportive and caring teachers, engaging coursework and great peer friendships, he excelled academically and in extracurriculars, including sports. After graduating from PCD, Mr. Wellemeyer went to Lawrenceville and then on to Yale, where he graduated with a B.E. in Chemical Engineering. He took a job at an oil refinery outside of Chicago and commuted to night courses at the University of Chicago, earning his MBA in 1963. His career focus shifted to financial and investment analysis at Exxon, then Faulkner, Dawkins & Sullivan, and finally at Morgan Stanley, where he worked from 1973 until his retirement in 1999. In 2005, he returned with his family to Princeton, and the twins entered Kindergarten at Princeton Day School.

John Wellemeyer is well aware of the impact a school can have on each student who passes through it. "My reason for supporting Princeton Day School is simply a way of thanking the School for the outstanding education our twin sons received here. It's also a way of thanking Princeton Country Day School for my experience there. Without PCD I wouldn't have been able to do any of what followed. The education I received there changed my life. I am forever thankful to PCD and its successor, Princeton Day School."

As Mr. Stellato noted during yesterday's ceremony, "John and Louise have been faithful friends of the School since long before I arrived and have continued to deepen that friendship in the 11 years since I've been here."

A beautiful etched glass plaque now hangs outside the entrance to the Wellemeyer STEAM Center dedicating the Center's name in honor of the Wellemeyer family. The inscription ends with a profound acknowledgment: "Their generosity will forever benefit those who teach and learn in this space."

Photo below: PDS Science Department Chair Jason Park and retired Science Chair, Dr. Leon Rosenberg, who shared in the School's vision for and implementation of the STEAM Center and curricular program, with John and Louise Wellemeyer, Head of School Paul Stellato and STEAM Coordinator Jonathan Tatkon-Coker.