LT Stadulis attended PDS from PreK through Grade 12, which is known as being a lifer. He matriculated to Cornell University, where he initially planned to major in mechanical engineering but ultimately completed his bachelor's degree in the interdisciplinary science of Earth systems. He earned his officer's commission through Navy ROTC and upon graduation was commissioned an ensign and selected for the highly competitive Naval Aviator career track. However, that was only the first of several steps and schools on the even more selective path to becoming a fighter pilot, and ultimately a tailhook aviator, meaning one of the very few who have the courage and skill to land an aircraft on a four-acre steel strip bobbing in the ocean, aka an aircraft carrier. Following nearly three years of Naval Officer and flight training in progressively more complex aircraft (plus recovery time from a motorcycle racing accident – sensing a 'fast-machines' theme?), LT Stadulis is now two years into his first assignment with an operational unit. He is a pilot in a F/A-18F Super Hornet squadron, based out of Naval Air Station Oceana in Virginia Beach, VA. LT Stadulis and the squadron returned from a seven-month deployment in 2018 to the eastern Mediterranean, where his squadron ran combat missions in Syria and Iraq and also sailed north of the Arctic Circle on joint exercises with one of our NATO allies, Norway.

What motivated your decision to join the military?

His first conscious memory of wanting to join the military, LT Stadulis explained, occurred at PDS as he was perusing D-Day by Stephen Ambrose, which was handed to him by Ms. Manno in Seventh Grade drafting class. He doesn't exactly recall why she handed it to him, but presumably it wasn't so he could absorb the military history. Nonetheless, it led to a desire to become a Navy SEAL, which later transformed into the desire to become a Navy fighter pilot. When I asked if he considered the Air Force, he replied with a reflexive and adamant, 'No!' (Hey there, USAF Maj. Chris Campbell '03, them's fightin' words, right?).

Other motivations include straight-up patriotism and the desire to support one's country as well as to follow the career paths of others in the elite body of Navy fighter pilots and their heritage, as well as doing an exciting and challenging job that very few people get to do.

What's been enjoyable about your military career so far?

LT Stadulis finds military life both exhilarating and rewarding. As they say, you get to see the world by exploring and meeting friends at global ports of call. He also values the camaraderie. Military officers often hear from colleagues who have moved into the civilian sector only to discover that values and concern for each other's welfare are considerably different there, a contrast made even more stark relative to the close bonds in the tailhook community. In short, LT Stadulis loves his job. He gets to fly multiple times a week. Dog fighting in an F18 is 'just another Tuesday' — how cool is that?

Like most military officers, LT Stadulis has frequently been called upon to brief senior military leaders, mentor subordinates and, of course, to both follow and lead within his squadron. His work teaches him leadership, presentation skills and public speaking, diligence, and perseverance. 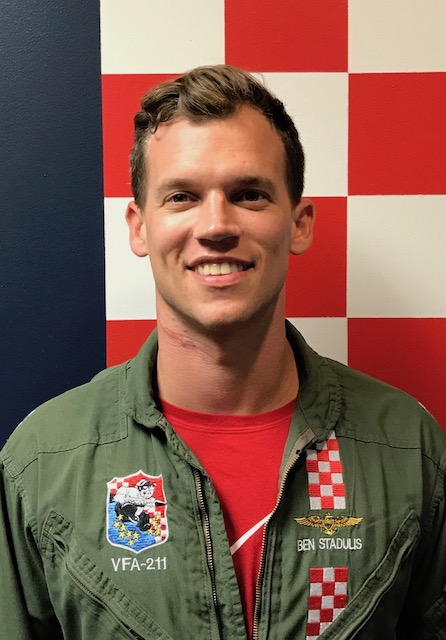 LT Stadulis has already attained one major career goal by earning his wings as a Navy fighter pilot. If the Navy had its way, it would expect Ben to aspire to become the commander, or skipper, of a squadron. However, sensing the privilege and honor of being part of such an elite fighting force, he wants to give back to junior officers who will walk in his steps, or fly in his contrail, so to speak. He is considering a slight detour en route to command, possibly becoming an instructor, which would require training at the Navy's Strike Fighter Tactics Instructor program, aka TOPGUN, which, according to a Navy webpage, "only the top one percent of naval aviation pilots can attend." Typical of military assignments, his tour with VFA-211 will likely last only two to four years, meaning he might have such an opportunity as early as next summer.

How did PDS prepare you for life and the military and who were your favorite teachers?

He most fondly remembers famed English teachers Mrs. Walker and Mr. Lamotte, which is somewhat ironic, given his predilection for one inclined to study engineering!

Critical writing and reading comprehension skills that LT Stadulis learned at PDS proved invaluable in college and beyond. In college, he saw classmates struggle with writing assignments, whereas he'd already suffered – but improved! – at PDS. Later, in military courses and as a junior officer he found and still finds that good communication skills are essential. He also appears to have an inherently strong worth work ethic that was positively reinforced while at PDS, which was especially helpful during flight school where a pilot's depth of study readily becomes evident in the air but is largely self-driven. He also played varsity soccer and lacrosse, which reinforced his team ethos, diligence for practice and studying situational strategies and his collaborative skills.

What can be done do to raise awareness among young people about military careers?

LT Stadulis advises providing opportunities to share with students what military careers are like to counteract any lack of knowing what is possible. Any other veterans, whether still in the service or separated, should self-report to PDS to share their stories! By serving as living examples, we can help current students more easily see what this career and lifestyle can look like.

Below, interviewer Taylor Hwong '88 is a Colonel in the U.S. Army Reserves and a member of the PDS Alumni Board. 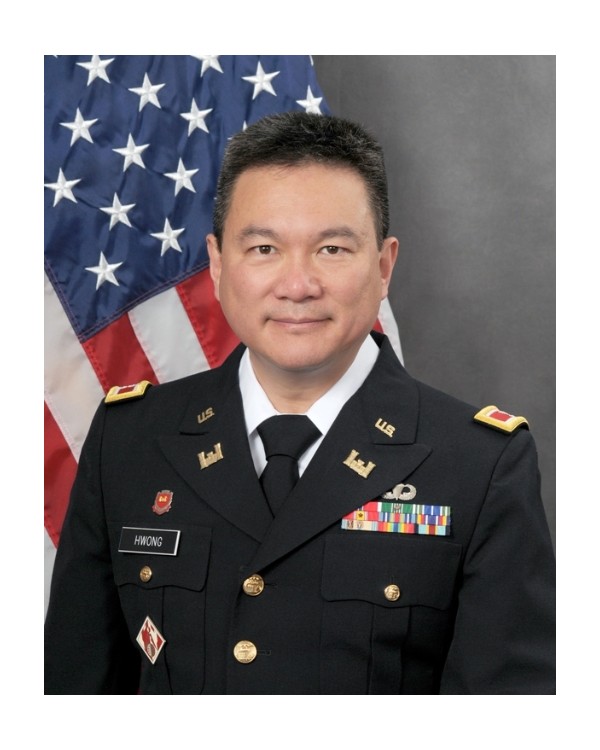