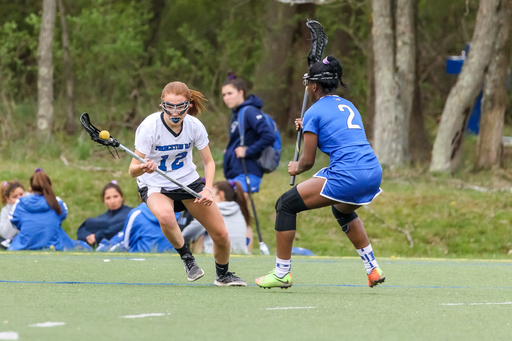 Boys Varsity Lacrosse After a tough season opener, Boys Lacrosse showed their resilience and are now dominating the competition. Following the lead of coach Joe Moore, the team quickly turned things around after losing their first game of the season to Hun and now boasts an impressive 7-2 record. Not only has the team been defeating the competition, but they have been dominating. The boys have put up impressive scores, defeating Peddie 20-3, Princeton High 17-3 and Holy Ghost Prep 17-4. In a recent rematch of last year's Mercer County Tournament final, the Panthers handily defeated Hightstown 14-3. Cal Caputo '20 contributed six goals and a pair of assists in the victory. Coby Auslander '19 has helped anchor the attack while Connor Green '19 has been steady in net. This season, team leadership has adjusted to the new coaching staff and continued their winning tradition with PDS Lacrosse. A key group of seniors has consistently led by example both on and off the field. Coach Moore summed up the program perfectly, "PDS Lacrosse defines the word 'FAMILY'. We are a resilient group that has stuck together and found ways to win during challenging points throughout the season."

Girls Varsity Lacrosse The Girls Lacrosse team has also picked up steam in recent weeks, just in time for their prep competition. The team record of 5-5 includes key wins over Peddie, Stuart, Hopewell and Princeton High School. The team has found a nice balance on attack, which was key in their big 18-8 win over Pennington. Zoe Cook '19 and Lyla Allen '22 both contributed four goals to the victory, while Elle Anhut '22 added 2 goals and 3 assists. Ellie Schofield '20 had a standout game, tallying 5 goals and an assist on the Panthers' path to victory. Schofield, Cook and Maddy Birch '19 have been sparking the attack, while Val Radvany '19 and Maggie Madani '20 have been holding down the defense. In their matchup against Princeton High School, Cook tallied her 150th career goal! The girls have been focusing on team chemistry all season and it appears that everything is clicking into place just in time for the final stretch. Coach Thomas states, "The girls have come together as a team. The entire senior class has provided outstanding leadership throughout the year. We played tough opponents early in the season, which helped us and allowed us to compete against a very talented overall schedule." The team is seeded third in the Prep Tournament and faces off against Pennington again on April 29.

Boys Varsity Tennis The boys started the tennis season strong, with two key wins over Peddie and the Pennington School. They dominated Peddie 4-1, sweeping all three singles matches along the way. Neel Adusmilli '22 won the first singles, while Aaron Phogat '21 won second and Andrew Marshall '22 took home third. Personal injuries and rain cancellations have made it hard for the team to solidify the doubles partnerships. Junior captain Eric Leung '20, who normally played first doubles, has been out due to a shoulder injury. When the team faced Pennington again later in the season, senior captain Shai Fruchter '19 was also out, leading to a close 2-3 loss. The Panthers have a young competitive team, with freshman Neel and Andrew stepping right into the lineup, as well as sophomores Aaron Chu and and Will Sedgley. The team is rounded out with Senior Jake Harris. The talent is incredibly consistent this year, with each player pushing their teammates to improve. Neel has continued to improve week after week, facing off against the best of best but always maintaining a positive attitude. "The goal for the Panthers is to finish strong at the Mercer County Tournament next week and win Prep States. As long as the team is healthy and the weather allows them to get in some matches to build their confidence, this team can go far, pull off some upsets and finish on top," states coach Jennifer Johnson

Varsity Softball sits at 1-2, after dominating Pennington on April 24. After falling to Pennington by 1 run in their season opener, the team was ready for the rematch. The girls came out on top, crushing their opponent 24-8. The team is built around dedicated seniors Elisabeth Berman '19, Brooke Smukler '19, Julianna Paterson '19 and Hailey Young '19, who have been making it work four years running. Smukler and Berman have taken care of the pitching duties for the team, although Smukler also tends the hot corners of first and third base when she's not pitching. Berman plays up the middle at shortstop and has filled in at catcher. Paterson, the backstop of the team, is considered one of the best catchers in the last decade or more. She is constantly throwing out base stealers and hitting doubles every chance she gets. Young patrols centerfield and lately has first base duties as well. Young also has a habit of stealing first base, as well as second and third.

Varsity Baseball is currently batting 500 at 5-5 this season. So far the team has beaten prep rivals Lawrenceville and Peddie, as well as defeating crosstown rival Princeton High School 15-5. However, the most exciting win so far was their eight run comeback against Gill St. Bernards to win on a walk off RBI by pitcher John Carroll '20. Carroll has had an outstanding start to the season with a .484 batting average and three wins on the mound. However, it is the leadership from the senior class, Matt Nyce '19, Brendan Bucceri '19, Tommy Sarsfield '19, Kevin Flahive '19, and Vin Gasparro '19, that has anchored the team. "One of our strengths is the fact that our upperclassmen mentor the younger players. Freshmen players are welcomed into the program, and paired up with an upperclassmen who will teach them skills, drills and what it takes to be a great teammate," said Coach Brian Dudeck. The Panthers success this season did not just happen by chance. The players have been putting in work during the off season to improve, arriving early to work on fitness or skills. According to Coach Dudeck, "work ethic is probably one of our greatest strengths as a program."

Varsity Golf While they have not gotten the outcomes they were hoping for, missing out on some big wins by only a few strokes, the golf team has been growing their skills, as well as their numbers, this year. The Panthers have a record number of girls playing golf this season, and for the first time in PDS history they have been able to schedule girl's matches and field a team at the Girl's Prep Championship. The varsity team has had 10 different players rotating into matches, of which only two are seniors. The young program feature six freshman boys, which bodes well for the future growth of PDS golf! Coach Brian Mochnal notes, "The PDS golf team has plenty of positive energy in the program this year and a bright future ahead."

Upper School Figure Skating Team has been busy preparing for their Skating Showcase which will be held on May 9th from 5-6:30pm. The team consists of 12 members of all skill levels. Each athlete has been working diligently on their solo routines and a group number. They are a strong team this year with a solid skill base. Everyone continues to challenge themselves with new skills. They are all looking forward to finishing the season with a fantastic Showcase.

Come out this Saturday for a whole host of games during Spring Weekend!