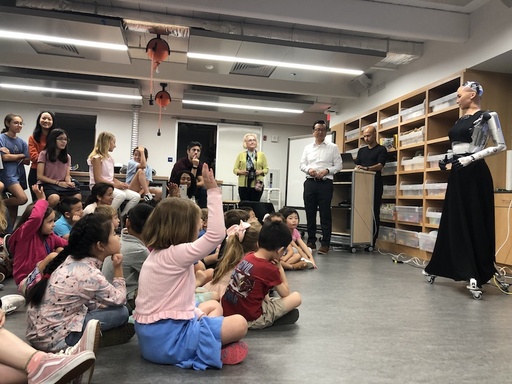 On Monday, students across all divisions filtered in and out of the Wellemeyer STEAM Center to interact with the Sophia robot of Hanson Robotics. Mr. David Chen, parent of a 4th and 7th grader here at PDS and a key investor as well as CFO of Hanson Robotics, brought in Sophia to expose the students to the cutting-edge fields of artificial intelligence and robotics technology.

Sophia is a humanoid robot who has gained quite a large following on social media and in pop culture, recently appearing on The Tonight Show with Jimmy Fallon, The Today Show and the cover of Cosmopolitan magazine. Sophia even addressed the United Nations and is the first robot to receive citizenship of any country (Saudi Arabia)!

The mesmerizing humanoid robot stopped by Princeton Day School on her way to New York City for Fashion Week, where "she" met new investors and spoke on the panel "Diversity Meets Technology." The students watched some of Sophia's mobility updates, listened to her, and came prepared with some savvy questions to ask. To see how she responded and to hear the valuable advice that she gave the students, watch the video below!

You can also take a look at our Flickr set here, which captures some great shots of Sophia and the PDS community.