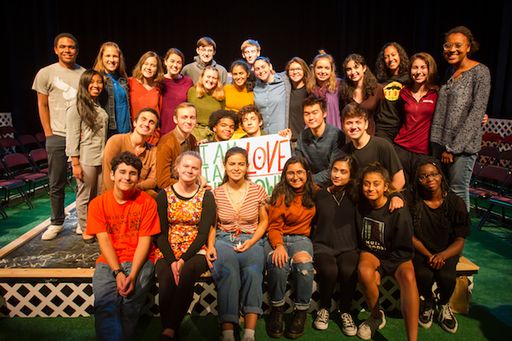 Upper School students in the award-winning Princeton Day School theater program tackled an emotionally-packed production of Eric Ulloa's 26 Pebbles this fall, a selection thoughtfully considered by renowned Director of Performing Arts Stan Cahill. He believed that these Upper School students would not only prove their ability as actors by embracing the heartbreak and the humanity of this play; he knew they would grow from the experience as well.

In a spartan and intimate horseshoe-shaped theater setting, the team's performances of 26 Pebbles unveiled the emotional and physical turmoil that shook the small town of Newtown, Connecticut in the wake of the Sandy Hook Elementary School shooting. The theater experience left the audience wiping away tears and cherishing the power and meaning of being part of a close-knit community.

Dramatic productions in the Upper School rarely stick to the mainstream classics as Mr. Cahill constantly strives to incorporate theater students' performance interests and develop their acting skills while also challenging the audience by presenting complex themes and a broader range of approaches. "Our students were looking to work on a production that utilized documentary theater techniques," Mr. Cahill noted as he explained how 26 Pebbles was selected. "Many of our most successful past productions, such as The Laramie Project; Twilight: Los Angeles, 1992; and Working explored the power of words that were not initially intended for the stage." (Upper School English Mia Manzulli is also studying this genre in her English class this year, echoing the School's commitment to broadening and deepening students' understanding of both historic and contemporary societal issues.)

Mr. Cahill was further intrigued when he found an article over the summer entitled, "Every High School Should Perform 26 Pebbles." The script and the play's approach, combined with the fact that it is impossible for young people to avoid the continual news of gun violence in our society, "made it imperative that I introduce the script to PDS," Mr. Cahill explained.

"The students were very respectful of the words and took great care of the characters in the play," Mr. Cahill continued. "Their sensitivity and empathy was inspirational. The show was emotional, but we built in many opportunities for reflection and conversation, more than in any production I've been involved in at the secondary school level."

As has been accomplished with regularity under Mr. Cahill's leadership, this production will be remounted in the spring with a new cast and will then travel to Edinburgh, Scotland, where the students will perform as part of the 2020 Edinburgh Fringe Festival. It is an impressive honor and a testimony to program quality for a U.S. high school theater program to receive an invitation to perform at the Fringe, which is considered the world's largest and most influential performing arts festival.

Below, students reflected on what they valued most about their experience with this fall's production of 26 Pebbles:

"I was an actor in performances from 3rd through 8th Grade, but was a part of tech crew in my freshman and sophomore years. When Mr. Cahill told us about 26 Pebbles, though, I knew I had to audition. Even though being an actor meant I didn't get to go to the weekly tech crew calls, I was super excited to go back to acting and be a part of something so special. I made a ton of new friends and bonded with a new group of people that I probably would have never talked to...I think the challenge in this show was that all of us were repeating real people's words and we had to make sure that we told the story the right way and paid justice to them. The Saturday of the show was the hardest day for me, because the audience was in a very sober mood and it transferred onto the actors. I had to try hard not to cry on stage, as I saw so many audience members crying and my character, Starr, is supposed to be a happy character who lightens the mood. We got through it, though, and it was an amazing experience to educate the community and pay my respects to the people who were affected by the Sandy Hook tragedy." — Hope Jerris '21

"For me personally, the most intriguing part of the process was carrying out the voice of each of my characters. This was a fragile and difficult part of the process because the script is a series of interviews. Another very powerful aspect of this play that I enjoyed was our communication with the audience. We created a community on stage, but we were telling our stories to the audience, extending that community message to everyone. In the end, 26 Pebbles was my most memorable theatre experience so far and I know the cast can't wait to show our work at the Edinburgh Fringe Festival!" — Alex Darenkov '21

"For me, I think that it is incredibly important that people everywhere see this show or others like it because this isn't just a story. This is a memory. These events actually happened to people, and for them, they couldn't end it and just take a bow, because this was and is their lives. School shootings do happen...It's important that people realize that this is our reality. It isn't just in theater, or movies, or TV shows. This is real." — Yael Tuckman '22

"This particular show was difficult to get through at times, as it is unlike anything I've ever done before and the subject matter is something not many people like to talk about. However, this show addresses the issues that should be discussed and solved. These characters were all real people who lived through this horrific event, and I can't even imagine all of the things they must have gone through and experienced. I love the message of community that 26 Pebbles demonstrates, and I appreciate the wake-up call it imposes...The voices of school students must be heard surrounding gun control and violence, and this show has given us a chance to do so. I am forever grateful for being a part of this play, and am happy that it resonated with so many people." — Laurel Masciantonio '23

"This play was a very interesting one to perform in for a number of reasons. Each role requires a certain amount of care for the individual and their story. Through the rehearsal process, we made it a point not to ad lib, as these are the real words of real people. We had the opportunity to even research and perhaps study the personality and behaviors of our given character, so that we may portray them in a theatrical, yet accurate and respectful way. I had the responsibility of portraying the town rabbi, Rabbi Praver. The weight that this play carries is an immense one, and it was important to us not to lose sight of why we're doing this play. One of the most meaningful and hard things that we all did as a cast was to conduct individual research on one of the 20 children that passed away. The most emotional part about that process was that every cast member, and I mean everyone, found numerous personal connections between the child that they picked, and their own life. It is extremely important that people see a play like this because it not only displays all points of view on the various issues that arise...these events have unfortunately become the norm in our country, and it is not until a conversation is started will that change." — Harrison Fehn '22

"I'm glad that we're doing this play in Edinburgh because it's somewhat saying, "Hey, we recognize that this is a problem in our country. We stand against gun violence, and we're acknowledging that it exists here." — Andre Williams '22

"This play was definitely the hardest I've ever done and probably ever will do...One thing you notice with TV or movies or theatre, is that even with sad scenes you can remind yourself that what you're seeing isn't real. But this story, these people, they're real. It's all real. So you can't run away from that and you just have to face it. The main thing that kept me going was staying grateful that I have this opportunity and reminding myself that through all the sadness, I have a job here and it's to tell a story, a story that needs to be told so no one forgets." — Charlotte Haggerty '20

Images: The first image is the entire cast and crew of 26 Pebbles, followed by a slideshow of assorted photos from the performance. More photos from the production will be available in a Flickr set soon!