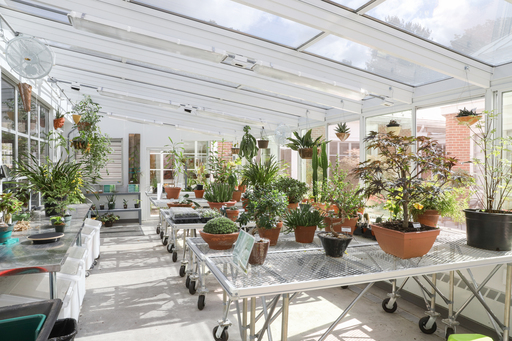 Princeton Day School is proud to announce that its new greenhouse and adjoining courtyard, which were rebuilt over the past year and completed in the spring and summer, were formally dedicated and named in a ceremony on October 28. Isaac's Greenhouse was made possible through a generous donation by Randy Mehrberg and Michele Schara, who journeyed from Chicago to attend the dedication ceremony. Parents of two Princeton Day School alumni, Sam '11 and Eric '19, Randy and Michele wanted to show their appreciation for the School, and particularly the sustainability program coordinated by Liz Cutler. Named Isaac's Greenhouse in honor of Isaac Cutler-Kreutz, the son of Liz and her husband, Tom Kreutz, the new greenhouse features a plaque that reads: "Every day each of us has the opportunity to plant kindness and love. What grows will be a better world, and anyone can do it. In honor of Isaac Cutler-Kreutz, who reminds us each day that our lives are filled with wonder and great joy."

Standing before a gathering that included PDS Trustees, families, faculty and administrative leadership, Mr. Mehrberg expressed his gratitude at the dedication ceremony for the community that is PDS, noting how the school welcomed them when they relocated from Chicago in 2008. "Early on we met the marvelous Liz Cutler," he explained. "She shared her passion for children and sustainability with us, and enlisted us to help with a range of sustainability programs and facilities, including the outdoor classroom." He continued that Liz's son Isaac "became my rock and guiding light...Isaac makes every day awesome for everyone who comes in contact with him. Both [Liz and Isaac] inspired us to make this gift in Isaac's honor."

Below, below, Isaac Cutler-Kruetz with Michele Schara and Randy Mehrberg, whose gift made possible the new greenhouse; a view of Isaac's Greeenhouse and the Penny Wallace '69 Courtyard 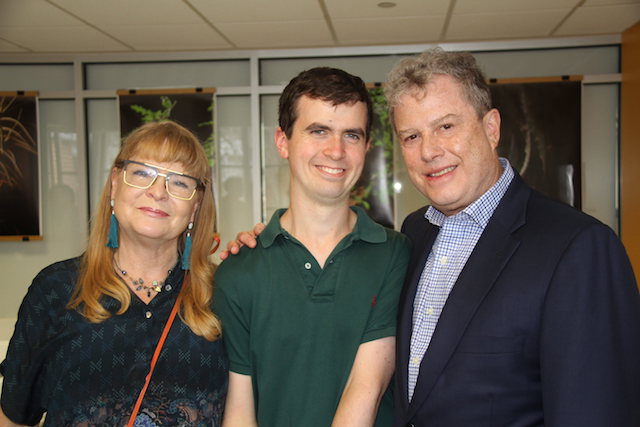 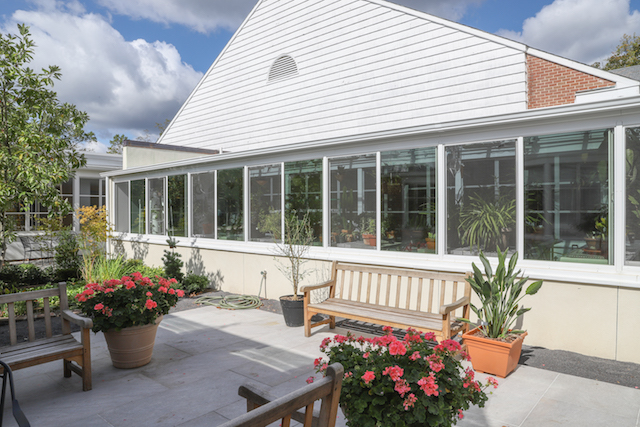 Adjoining Isaac's Greenhouse is the beautifully refurbished Penny Wallace '69 Courtyard, which greenhouse manager Eric Rempe (also the School's ceramics teacher) describes as a nature-focused refuge and multifunctional meeting place. With its lush greenery, multiple seating areas and stocked koi pond, it has already become a relaxing space for people to meet, have lunch, and enjoy a convenient and calm outdoor space during the school day. Garden Coordinator Pam Flory has many uses in store for the space, including as a site for student repotting projects and classroom discussions, particularly during the off-gardening season. In the spring, Pam's seedlings, which are sprouted annually for the popular PDS Seedling Sale, will be moved out to the courtyard to be hardened off after they begin their lives in the greenhouse. The Penny Wallace '69 Courtyard occupies the former site of the School's very first greenhouse, which in turn was named in memory of Penny and made possible through the generosity of her parents, Jack Wallace and Peggy Wallace '27. Penny, the sister of Trustee Emeritus John D. ("Jack") Wallace '48, loved being outside and connected to nature, and the School is privileged to name this beautiful outdoor courtyard in her honor. 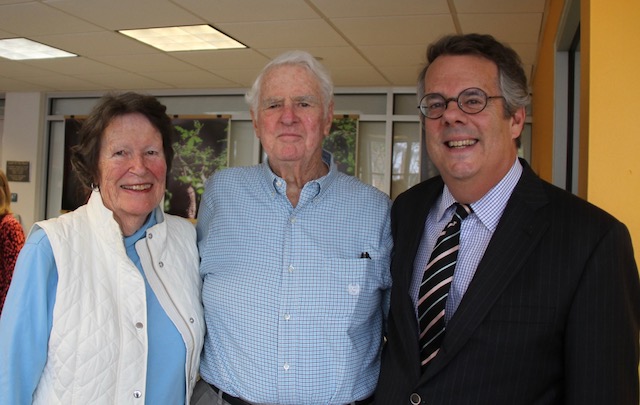 Mrs. Happy Wallace (left) with her husband, Mr. Jack Wallace '48 (center), and Head of School Paul J. Stellato. Mr. Wallace is the brother of Penny Wallace '69, for whom the new courtyard adjoining the greenhouse is named.

PDS is dedicated to helping students understand the effects of their actions on the world and empowering them to apply the skills and talents they possess to make a meaningful difference. The School's outdoor garden, Isaac's Greenhouse and Penny Wallace '69 Courtyard are places where student actions create consequences that can be experienced directly in the natural world. This hands-on exposure to the natural environment of plants, animals and sustainability practices instills a deep connection with the planet and an awareness of one's impact. Ask any student, such as Caroline Haggerty '20, and you will learn firsthand how these experiences take them from an intellectual understanding of sustainability to a passion to create positive change and care better for the earth.

Caroline shared about her personal journey exploring the garden and sustainability program here at PDS, and why she believes the greenhouse will make a difference in students' lives. After entering high school with only a passing interest in sustainability, she joined the EnAct Club, as well as the Garden Apprenticeship Program during her sophomore year, after being cajoled by a friend. As she attended meetings, she found herself shifting from merely listening to contributing to discussions and expanding her ideas and knowledge. Moreover, once she started volunteering in the chicken coop and garden, she discovered how much she loved being more directly connected to the earth. "I found that going outside for just those 20 minutes a day grounded me and gave me time to reset." Last year, she became even more involved, helping organize the Harvest Festival, giving a current events presentation in EnAct, and working to clean up the garden and prep it on seasonal community garden days. 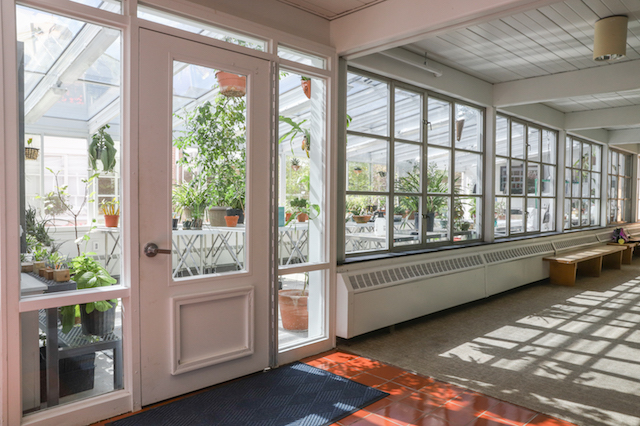 "The greenhouse presents an opportunity to interact with nature in a space where I already spend most of my time," Caroline explained. The greenhouse's accessibility in the main classroom building allows her to pop in frequently and accomplish small tasks that connect her to the natural environment on busy school days when she can't devote time to being outdoors in the garden.

"My favorite part of the greenhouse is the fact that it is used by so many members of the school for many different tasks," Caroline concluded. "My experience with this ranges from waving 'hi' to the lower schoolers in Garden Club, to seeing my high school friends who take Latin learning about how the plants in there relate to their class." For Caroline, Isaac's Greenhouse "is a green oasis where not just those interested in plants, but those wishing to learn in general, can go to get an interdisciplinary experience." 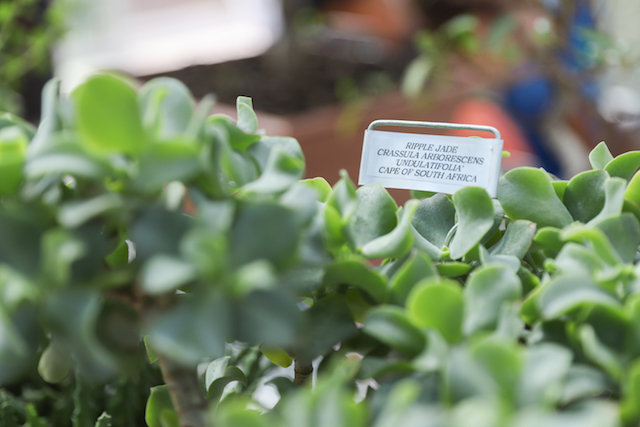 At the dedication, Head of School Paul Stellato connected the new greenhouse program directly with the School's mission of preparing graduates "to act knowledgeably, to lead thoughtfully, to share generously, and to contribute meaningfully." Mr. Stellato noted that the greenhouse represents a richer chapter for the School in helping prepare students "for a world that is very different than the world we grew up in." Preparing today to solve the complex issues waiting for them after graduation requires young people to dig more deeply to make sure they are asking the right questions about how they can play a role in helping preserve "what is nothing less than the health of the natural world," Mr. Stellato concluded.

The greenhouse opens the door to increased interdisciplinary explorations across all grade levels to further students' understanding across program disciplines. For example, Middle School science classes will study plant neurobiology, learning how plants can perceive and respond to environmental conditions by counting, remembering, smelling and feeling. (One such plant is the Venus Flytrap specimen in the greenhouse, which has trigger hairs that must be tripped two times within 20 seconds in order for the trap close.) Upper School Biology teacher Kelley Bethoney's classes will experiment with trait isolation in Wisconsin fast plants. Todd Gudgel, US Latin teacher, is bringing his classes in to learn how the Latin classification names of the greenhouse collection provide clues about how we understand the plants and the environments from which they come. The arts are also focusing on the specimens in photography and drawing classes. See the graphic below for a more complete list of interdisciplinary uses of the greenhouse this year. 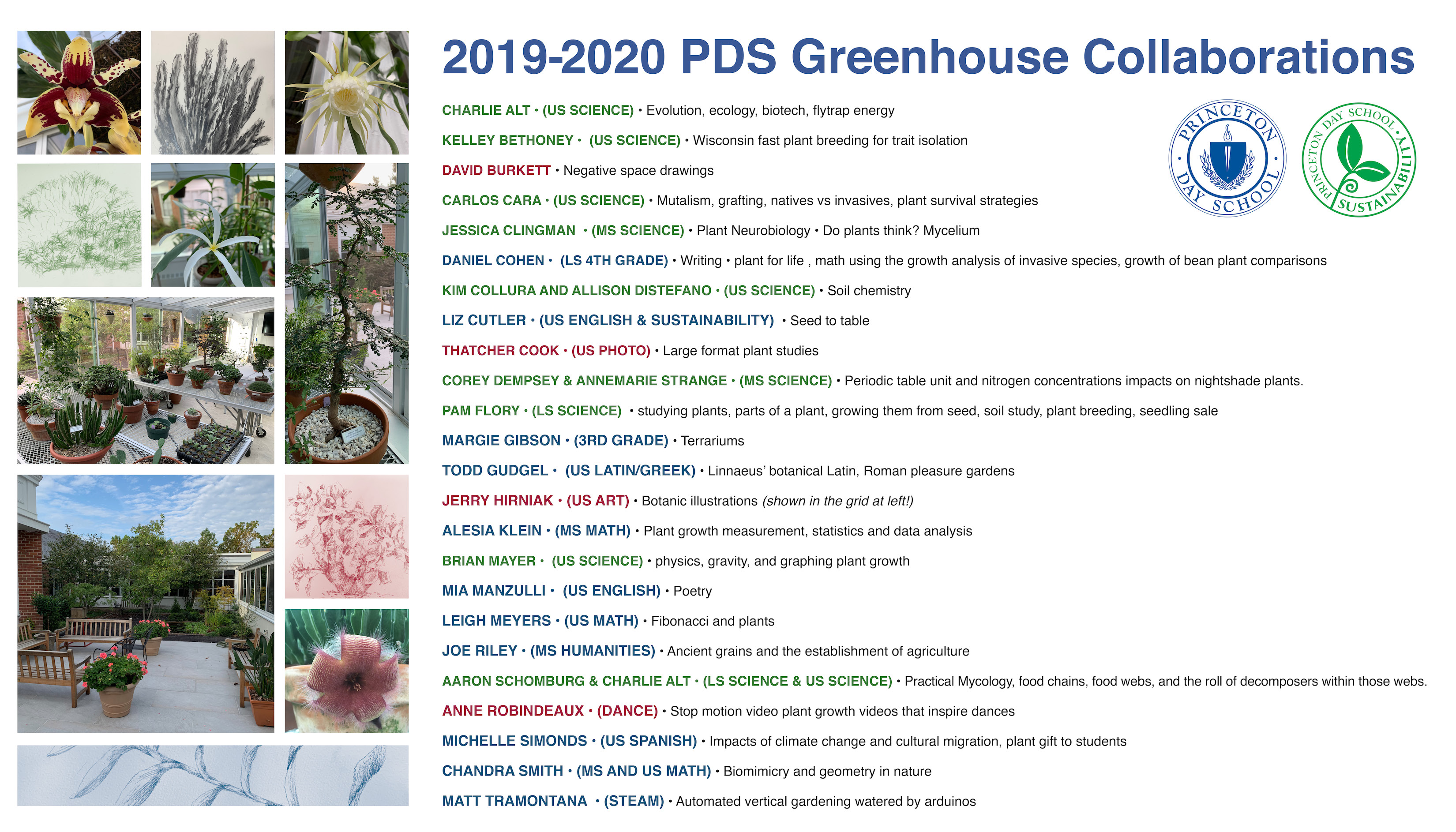 Enjoy our Flickr photo album with more coverage of the October 28 dedication event here! To learn more about Isaac's Greenhouse and the program opportunities it makes possible, click here.