Members of the Upper School Get Serious About Hispanic Heritage Month
Oct 14 2019 9:41 AM

"It's time for us to get serious; serious about education, serious about identity and serious about celebration." This declaration by Josh Colon '21 at the Upper School gathering held earlier this month opened the student conversation about Hispanic Heritage Month, which runs from September 15-October 15. The assembly was developed and hosted by the Black Latino Student Union (BLSU) and led by co-chairs Josh Colon and Zoe Riviera '20.

The assembly focused on personal narratives, each showing the diversity within the Latinx community as well as how their lived experiences require courage, resilience and sacrifice. Before the presentations began, Zoe called for students and adults to think about individuals and the diversity within any community, emphasizing that "the Latinx community is a living, enduring, breathing entity and not uniform; queer Latinx people exist, trans Latinx people exist, Afrolatinx people exist. We exist." Zoe urged her classmates and teachers "to acknowledge your Latinx peers and to ascribe value to their complex and heartfelt narratives of perseverance, love and courage — the courage to heal visibly, the courage to express uninhibitedly and the courage to embrace their identity." 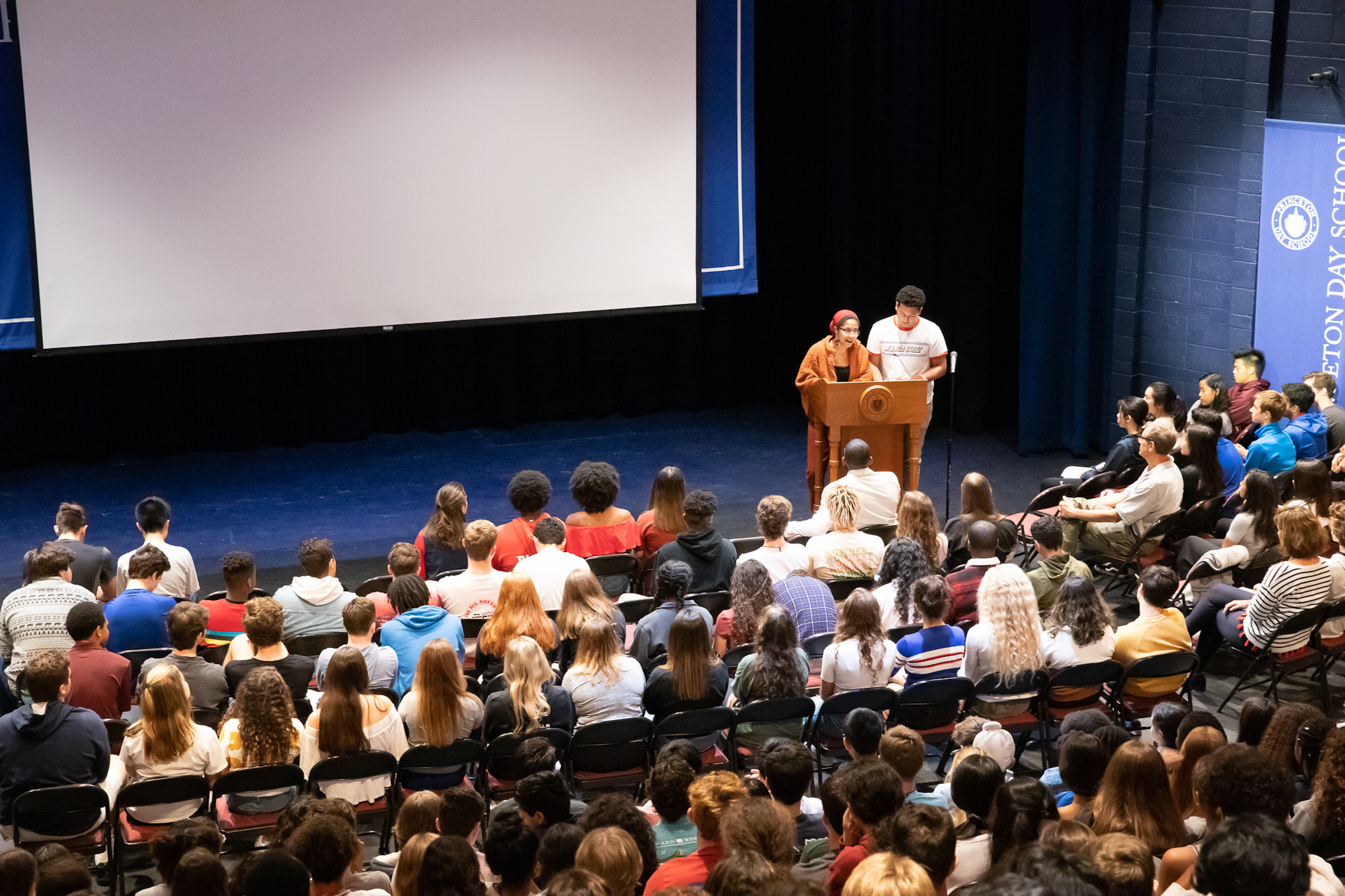 Val Cerna '20, a senior from Guatemala, began her personal narrative by explaining her parents' decision to leave behind their lives in Guatemala, which meant forfeiting their opportunity for a college education, in order to come to the United States to seek a brighter future for their children. "I am from a decision that was not only bold, but also courageous, which is why I look at my extremely hardworking and loving parents today with so much admiration." She also added that she feels pressure as well to make the most of her educational opportunities, knowing how much her parents sacrificed for her.

Val went on to describe aspects of her life that have contributed to her identity. "I am from only and always speaking Spanish at home...even though it wasn't my first language and I grew up learning more English than anything. Val, who lives in Trenton, explained that she has attended Princeton Day School since First Grade. PDS is "what I like to call, 'my second world,'" Val shared. "I am from walking the school hallways and feeling like I am a completely different person than who I am at home. I not only feel this way because of the difference in my complexion or my socioeconomic differences, but mainly because of the way I identify: a young Hispanic woman." Val ended with this powerful message: "now I know that if anything, my heritage makes me strong, unique, and overall, it's what I love referring to as my own personal superpower."

Sophomore Idaliza Perez Jimenez explained that she was born and lived in the Dominican Republic until the age of three. Ida discussed the hardships of her family's journey to America, the hard work that went into finding stability here and the justifiable pride that comes from overcoming obstacles. "Looking back on these moments, I now see why my mother is so hard on me today about my successes. She was just trying to ensure that I wouldn't have to go through that same experience when I become older." One way of providing opportunities for her daughter was a focus on education. "My mom cares about my education so much that she wanted me to come to PDS since I was in fourth grade but to be honest, I didn't see what the big deal was" at the time. That is, until she realized that she was one of the only students in her school who cared about learning and was excelling. Ida eventually came to PDS as freshman.

The transition to PDS was a little shocking, Ida recalled, as she coped with both the socio-economic differences and the academic rigor. She explained that she has found a solid footing and succeeded at PDS, perhaps in part because the one thing she "will never lack is a wealth of being cultured." She proudly stated that "Yo se como hablar espanol, sometimes I eat mangu con salami for lunch y despues asopao for dinner, I listen to Romeo Santos at parties to dance some bachata." She encouraged her classmates to reflect on why it is important to hear these identity stories and how it can help them better understand the Latinx community. "Being Hispanic is a privilege and I would always let that shape me as a person," Ida concluded.

André Williams-Reyes Jr, a sophomore at PDS whose family is from Puerto Rico, provided a concise yet poignant personal narrative. He began by highlighting how family is central to his Latinx identity: "they never had much, and weren't nearly as well-off as they wanted to be, but one thing they had steadily, after every violent protest, riot or flood, was each other." He also discussed the effects of Hurricane Maria, which the island is still dealing with more than two years later. This terrible storm and its devastating aftermath has caused many of his family members in Puerto Rico to relocate to the U.S. in hopes of a better economic life. André concluded by discussing how he has experienced his Latinx identity.. "Because I don't look traditionally Hispanic, the amount of times this identity has been denied to me by individuals is numerous." While this used to get under his skin, his mother taught him from a young age to keep his head up and remember his roots. "Arból de la esperanza, mantente firma: Tree of Hope, stay strong."

The final speaker was a PDS Alumna and current PDS college counselor, Ms. Darling Cerna '13. The older sister of Val Cerna '20, Ms. Cerna was born in Guatemala City. In her remarks she joked about the typical stereotypes that face the Latinx community, such as having a million cousins and an overprotective mom. Ms. Cerna explains that "it's easy to talk to you about the jokes I've told many times, but it's difficult to talk about the stereotypes surrounding Latinos that were sometimes hard to live up to as I was growing up." For example, she is not good at dancing the salsa, bachata or merengue and she prefers Train and Taylor Swift to Daddy Yankee and Don Omar. For these reasons, she heard and felt all too often that she "wasn't a true Latina." At the same time she felt defined as Latina because of her skin color, her hair styles, and her broken english. All of this made it difficult for her to understand her identity. "I felt like an oxymoron," she explained.

One of the biggest paradoxes of all, she continued, is that she has lived in the U.S. for 19 years now but is not a citizen or resident. Ms. Cerna discussed her unique status as a DACA, Deferred Action for Childhood Arrivals, student. This policy allowed her to live and go to school in the U.S. but at the same time created personal challenges. For example, she wasn't able to get her license until her freshman year of college. She also did not qualify for government financial aid for college. Despite this, Ms. Cerna did attend college, and eventually returned to PDS to help other students achieve their dreams as well.

What does being Latinx mean to her? "Here is the reality: Latinos are hard-working individuals who rely on their families for support and they will do everything they can to help you, no matter what the situation may be," Ms. Cerna declared. She added that her mother often told her to "'appreciate what you have because there are others who have less than you.' I admire their strength and courage, and I think it's very emblematic of that motivation and determination that you can find in most Latinos." For Ms. Cerna, Hispanic Heritage Month is not just a month, "it is an everyday experience, it is an entire life. It's more than just having parties where they serve chips and guac. It's about the hardships that Latinos face everyday, with their chin up and the will to fight for what we believe in. It's about family, and knowing that the bonds you have with family members will always be ones that mark your past and your memories. It's about sharing stories, the way I am sharing this story with you today, in hopes that you have a better understanding of why I am proud to be Latina." 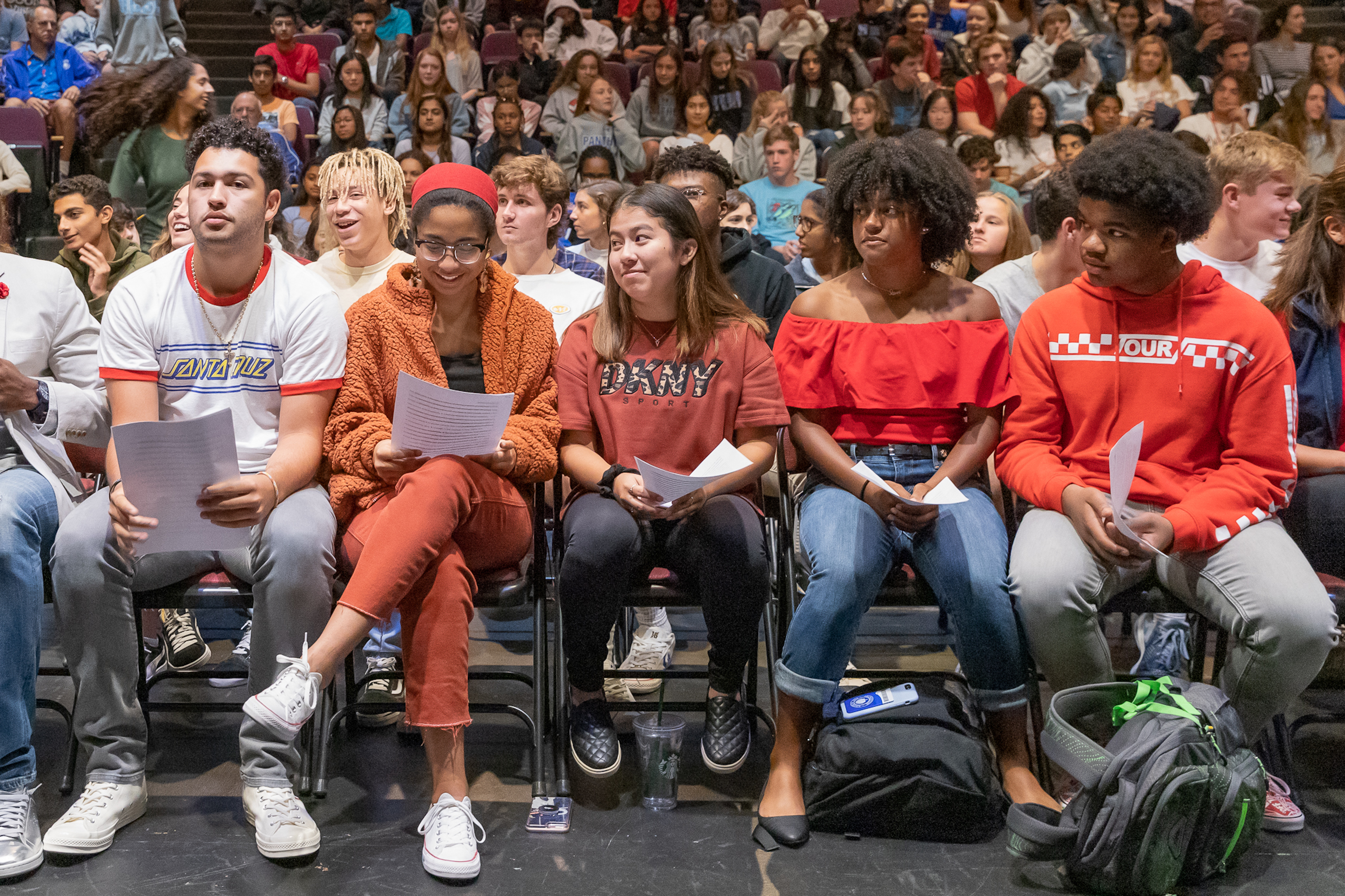