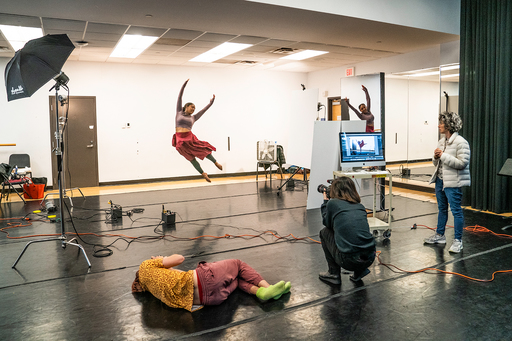 Guest Artist Lois Greenfield Teaches Dance Photography Workshop
May 11 2019 1:20 PM
The PDS photography and dance departments recently hosted world-renowned dance photographer Lois Greenfield for a workshop on photographing moving subjects.
Greenfield taught three sections of the workshop, with an emphasis on on building rapport with a subject and how to capture movement between the points of emphasis in dance.

"Most people like the peak moment, which I don't like at all because it's very static," Greenfield explained. "In retrospect, I've found I'm often taking moments of someone going up into something, or someone going down." She advised students, "Be alert about the moment."

Lois Greenfield began her career as a photojournalist, but was drawn to the graphic potential of dance. She covered the experimental dance scene for the Village Voice from 1973 to the mid 90's. In 1982, she decided to open a studio where she could not only control the lighting, but could also direct the dancers in her exploration of the expressive possibilities of photographed movement. Her unique approach to photographing the human form in motion has radically redefined the genre and influenced a generation of photographers.

She has created signature images for most of the contemporary dance companies, from Alvin Ailey American Dance Theater to American Ballet Theatre. Many of these photos have appeared in her two bestselling books- Breaking Bounds, 1992, and Airborne 1998, both published by Thames and Hudson LTD, UK and Chronicle Books US.

Her latest book, Lois Greenfield: Moving Still, from the same publishers, was released in 2015, and the accompanying exhibit has been on tour within the US and to Russia, China, and Colombia. (excerpted from loisgreenfield.com)