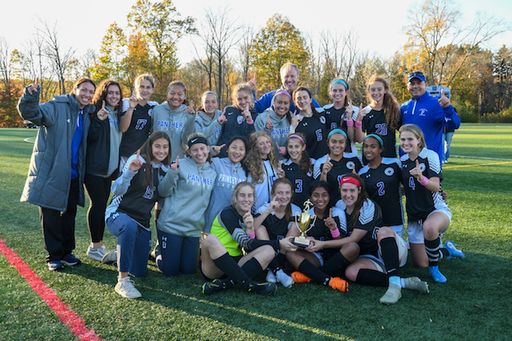 The Princeton Day School girls soccer team continued to dominate the Prep B field this year, besting Newark Academy, 2-1 at home on Baker Field, on Friday, November 1, to win the NJISAA Prep B championship, their sixth consecutive tournament trophy. The Panthers (16-3-1) reached the finals in exciting fashion this year after knocking out rival Mount Kimberley Academy in the semifinals by scoring the game-winner with 25 seconds remaining. The last-minute victory brought them face-to-face with the Newark Academy Minutewomen, who were on a roll, having won six of their last seven games. 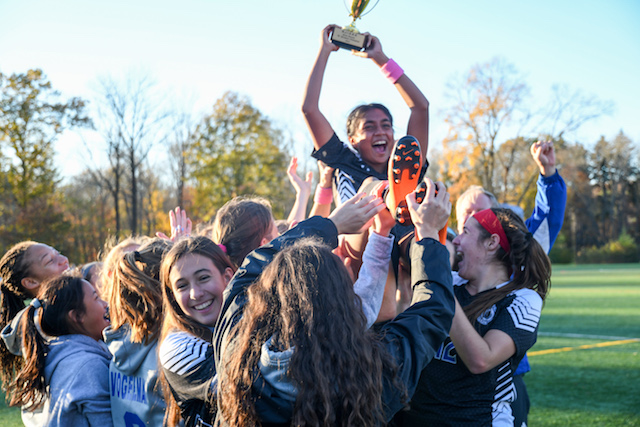 PDS got down to business early in front of a large crowd of cheering home-team fans, taking the lead in the eighth minute on a skilled goal by junior Kelly Beal. Beal brought down a long pass from senior Ariana Jones, maneuvered past a defender and rocketed a left-footed shot into the top of the goal, tallying her 17th goal of the season.

Coach Pat Trombetta said, "In this kind of game where you're playing a defensive-minded team, scoring the first goal is real important. You got to try and pull them out a little bit and they got to catch the game."

Junior Jules Romano doubled the advantage in the 31st minute with a terrific right-footed volley from 22 yards out. She nearly scored again five minutes later, but her 25-yard free kick hit the post. This is the second straight year in which Romano scored in the final. "I just saw the (ball) in the air and saw the corner (of the goal)," Romano said. I figured if I hit it hard someone would get on the end of it."

PDS did put the ball in goal with nine minutes remaining in the game, but it was called back for a foul inside the box, inspiring Newark Academy to mount a final assault to try to tie the game. After Newark Academy's Kate Fishbone capitalized with 2:54 remaining to make it 2-1, the Panthers and their fans dug deep to rise above Newark's comeback efforts. "We just needed to stay focused and not let the pressure get to us," said senior defender Tulsi Pari. "We can't anticipate a win or anticipate a loss. We have to stay mentally focused." 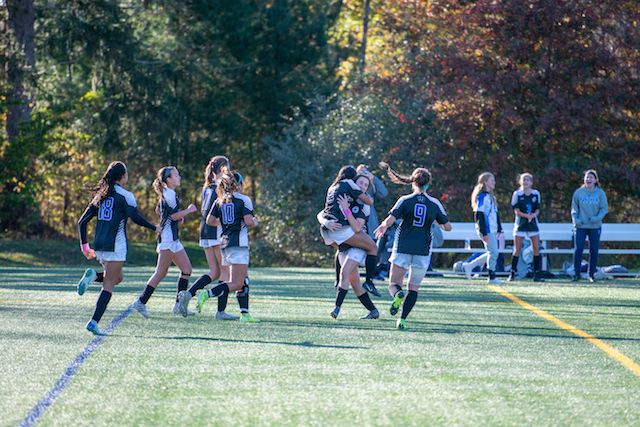 The senior class, made up of Pari, Briana Astbury, Riley Felsher and Ariana Jones capped off their career with a perfect 4-4 run in the Prep B tournament. All four are also planning to play collegiate soccer next year.

Pari reflected that the team's success was a result of the dedication of the team and how much they loved each other this season. "They have your back on the field and off the field. The coaches really dedicate so much of their time and not just during games. All of them are scouting, watching game film and helping us prepare."

In addition to this being the program's sixth straight Prep B title, it is the ninth overall championship, eight Prep B and one Mercer County Tournament, under Trombetta, who just concluded his 13th season at PDS.

"We're just one of the tightest-knit teams we've ever had," Romano said. "Everyone is playing for everyone. We just wanted to play for the seniors and send them off on a good note. Everyone was playing like it was the last game they were ever going to play." 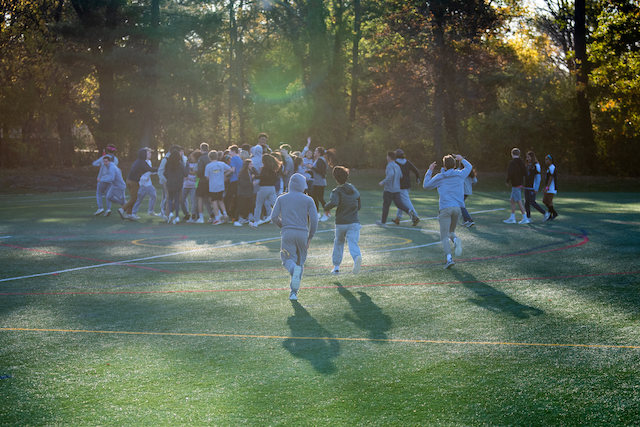 Quotes thanks to the Trentonian news coverage, Kyle Franko, reporter.