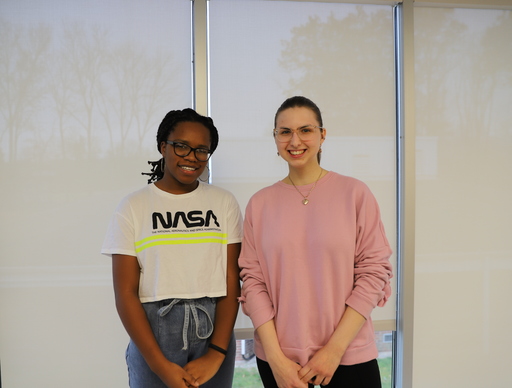 Congratulations to Fechi Inyama '20 and Alexandra Glezer '20 for receiving the Princeton University's Center for French Studies Prize for Excellence in French! The award recognizes high school students who have excelled in the study of French language and literature. French teacher Laurence Farhat nominated the students at the end of their junior year.

In addition to a standout French student, Fechi is also involved with the BLSU, the Science League, and Mock Trial. She serves as a Peer Group leader, Writing Center mentor, co-head of the Harry Potter Club, Mu Alpha Theta member, and a graduating senior of the PDS REx program. Outside of school, she dedicates her time as a Corner House Student Board leader and an outreach coordinator of the New Jersey Student Climate Advocates. Fechi's favorite moment studying French at PDS was her school sponsored spring break trip to France in March of 2017, where she was able to converse with locals in a Parisian marketplace.

Alexandra was born in Montreal, Quebec and lived there for 11 years, during which time most of her subjects were in French. When she arrived at PDS in 10th grade, she "simply hoped to be able to continue French within the school." She certainly got her wish this year, when she was given the opportunity to takea college-level French course at Princeton University, FRE 378: Literature in the News. Alexandra stated "I have been able to take my study of the language to a whole new level; I have been able to pursue my french endeavors by immersing myself further in the literature, more specifically newspapers, and increase my understanding of the language itself and its impact on France's history, society, and culture." Alexandra credited Ms. Farhat for continuing her love of the French language. "Not only has she helped me grow as a person and made me an even better french speaker, but she also has been encouraged me at every step of my journey at PDS."

Outside of the classroom, Alexandra serves as a co-head of the French Club, the Russian Club, and the Pet and Wildlife Salvation Club (P.A.W.S.). She is also managing Staff Photographer for the Spokesman and an Energy and Climate Scholar (ECS). Outside of PDS she serves as an Outpatient Ambassador who volunteers at the PennMedicine Hospital in Plainsboro.

Congratulations Fechi and Alexandra on this impressive achievement!