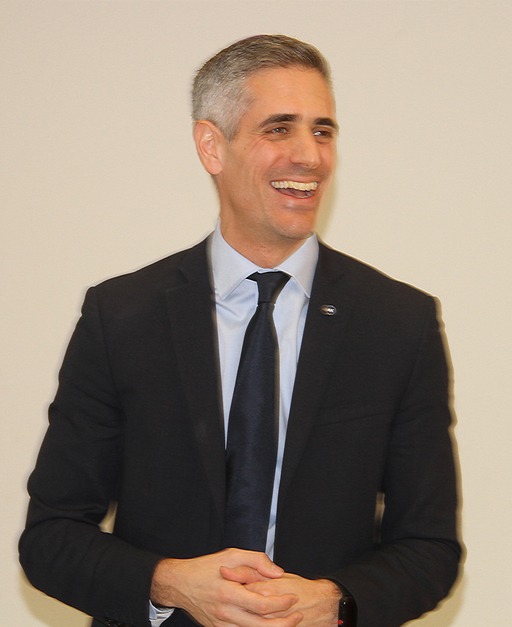 Avi Mayer, the Managing Director of Global Communications for the American Jewish Committee (AJC), visited Princeton Day School yesterday to address the entire Upper School and discuss the recent rise in antisemitism throughout the United States. The AJC focuses on advocating for civil rights for people of all faiths, ethnicities and identity, and for Jews in the U.S. and around the world.

Mayer brought global issues of antisemitic hate and fear to life through vivid examples describing the increase in high security at Jewish schools and synagogues that is now an accepted part of Jewish life in Europe and the United States. He also described a recent trip to Turkey, where, in order to visit a synagogue in Istanbul, visitors must call ahead of time and send a stamped copy of their passport to be approved. Mayer did so, then wound his way through a maze of security to enter, where only about 20 had the courage to gather in a space built for thousands. While there, he saw firsthand that "people cannot live openly as Jews in Turkey today." Mayer emphasized that while this may seem foreign to us, this trend has unfortunately come home to America. He then presented a troubling statistic: "In the U.S., 57% of all religiously motivated hate crimes are focused on the Jewish community, and yet the Jewish community makes up less than 2% of the American population."

Mayer continued, "this is something that is affecting people on a very visceral level, but we did not understand how visceral that was until, quite frankly, we asked. My organization, the JLC, commissioned the first ever survey of American Jews on the subject of antisemitism in America. And we did it to answer that question of how American Jews are feeling in this era of increased antisemitism and antisemitic violence." The survey collected over 1,200 responses and Mayer and his organization were shocked by the results. They found that 88% of all American Jews believe that antisemitism is a real problem today and that 80% believe it is worse today than it was five years ago. The survey also revealed that 35% of American Jews have personally been victims of antisemitism in some form and 31% of those surveyed said they have concealed their Jewish identity in the U.S. out of fear for their safety. These answers help explain why 71% of respondents said they had armed protection or had received training for active shooting situations at their synagogue.

The AJC also found that young people (ages 18 to 29) reported feeling more vulnerable than any other age group. Fully 45%, compared to 35% overall, had personally been victims of antisemitism and 40% have concealed their Jewish identity in public. Mayer stated that he and his organization "never would have imagined this would be a reality for Jews in America. Ever."

Mayer noted that in our free society, speech is protected and individuals feel entitled to express their opinions, yet we should all be aware of the point at which declarations devolve into hate speech. Mayer offered a strategy for self-detecting whether social interaction or speech crosses a line. To determine if your speech veers from valid criticism to bigotry, racism and/or antisemitism, he provided the '3 D Test' -- speech that demonizes, delegitimizes and/or sets up double standards. For example, characterizing something as the worst thing in the world, something that does not have a right to exist, or holding something to a higher standard than that used for others, crosses those 3 D lines. 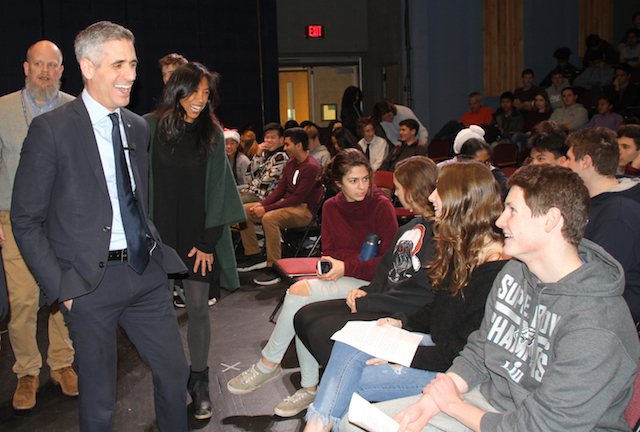 Following his presentation, Mayer invited the entire US assembly to ask questions. One student asked about the recent antisemitic attack in Jersey City and how the profiles of the shooters didn't fit into classic antisemitic groups. Mayer explained that "one of the things that is unique to antisemitism is that it is so multi-faceted and comes from so many different sources." The AJC survey noted that both political parties see the other, as well as themselves, as contributing to the problem. Mayer noted, "It is not ok to just point fingers at the other side of the political divide... we need to be rooting out antisemitism from within before we start addressing it on a larger level." Mayer concluded that "none of us are free to give up on the fight against antisemitism; we need to confront it wherever it might be."

Another student asked how the younger generation of American Jews would be affected by the increase of armed security outside of Jewish synagogues. Mayer responded that the "truth is we don't know." He shared that he knows children who won't attend Hebrew school anymore because they know there have been attacks on synagogues. Mayer challenged the audience, declaring that "the notion that anyone would feel insecure celebrating their faith or identity, whether they are Jewish or any other background, should be of tremendous concern for all of us as Americans."

When asked what is contributing to the increased attacks against Jews, Mayer responded that he believes it is coming from the fact that "we are living in a time of radicalism, of polarization," which can be seen in our national conversation about a whole host of issues. Mayer believes "that this atmosphere of extremism and polarization brings about extremist ideologies that are tinged with or have antisemitism at their very core." He also mentioned that "trends of radicalism elsewhere in the world are slowly finding their way into American discourse."

Prior to the assembly, Mayer hosted a Q&A session with the 9th Grade World Religions students, who are currently wrapping up their unit on Judaism. The students asked several questions and engaged in an extended conversation about hatred, bigotry, racism and antisemitism. One of the most hopeful takeaways focused on how we might work to combat bad speech with good speech, and how we can all work harder to identify our own biases and work to eradicate them from our language and actions.

PDS has already taken extensive efforts to ensure inclusion and diversity within our community. Upon returning from break, the Upper School will embark on an months-long Anti-Hate program that will feature student-led workshops and culminate in an Anti-Hate Teach-In. 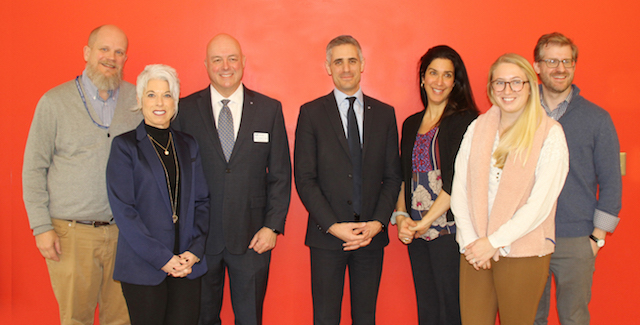