Princeton Day School alumnus Aaron Shavel '11, a project engineer and superintendent for the building company Judlau, returned to The Great Road recently to share his perspectives and expertise with a group of Middle School students immersed in three distinct "Da Vinci" projects. The Da Vinci program is a signature Middle School experience at PDS, offering a fascinating series of innovative, hands-on, primarily project-based courses that run on a multi-term schedule throughout the year.

Mr. Shavel's experiences managing the modernization and rebuilding of several underground and surface-level features of subway stations throughout New York City brought to life critical aspects of each of the Da Vinci classes with whom he spoke. This fall, the "Future City" Da Vinci class offered a project-based learning program where 6th, 7th and 8th graders imagined, researched, designed and built cities of the future. The "Shark Tank" class of 7th and 8th graders explored creating and evaluating new products, and the "Clicking Into Place" class of 7th and 8th graders used iPads to study and photographically capture their personal sense of the campus's built and natural environments, then modified, enhanced and digitally published these photographs using multiple apps and programs. 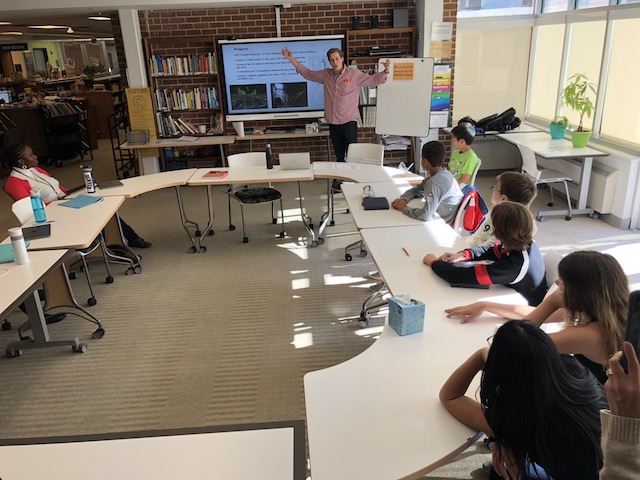 In a presentation filled with before and after images of subway stations and tunnels, project plans and transit maps, Mr. Shavel took students on a fascinating journey of some of New York City's urban infrastructure needs, challenges and solutions. He loves his role as a project engineer at a company that focuses on designing and building projects across the country and internationally ranging from mass transit facilities to bridges, tunnels and more. Among the highlights was a conversation about funding challenges for large urban projects and Mr. Shavel's description of the daunting tunnel and access work he and his extensive team completed at Penn Station, the iconic transit crossroads in NYC that most of the students and teachers recalled traveling through in the past; some even remembered the colorful tarps Mr. Shavel's project team had installed to help guide crowds safely through the station during construction over the past year. 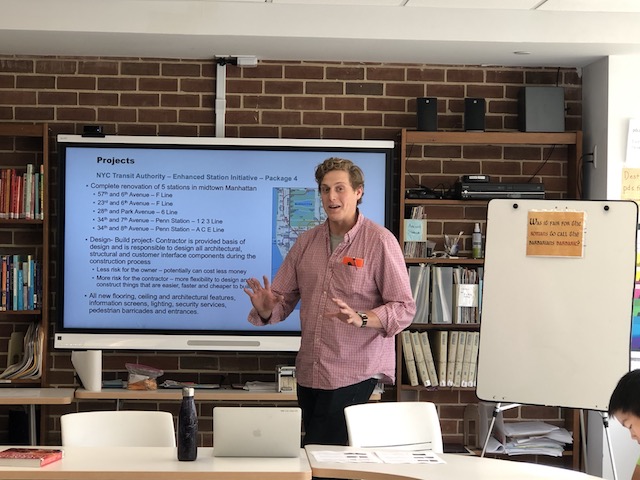 Aaron was thrilled to be back at Princeton Day to give back to a community he felt had given much to him. Asked by a student during the Q&A session about how he got started in his career, he shared how his time at PDS had helped prepare him. It began with his mother, he explained, who was in the construction industry, which provided familiarity with the world of project design. From an early age, he felt he wanted to be involved somehow in this kind of work. At PDS, he jumped at the opportunity to take architecture courses that broadened his understanding of engineering principles and fueled his interest in building and design. He credits the excellent architecture program at PDS, led by David Burkett, with helping him recognize his facility for and love of engineering; he was the first PDS graduate to attend Rensselaer Polytechnic Institute (RPI), where three more PDS students have since been admitted, including his younger brother Jacob Shavel '15.

Photos: Aaron Shavel '11 was invited by Middle School teacher and Da Vinci co-coordinator Annemarie Strange (on the left in photo with Mr. Shavel) to present to students in three Da Vinci classes this fall, including those immersed in a project to build a future city. Mr. Shavel explained his team's work to rebuild tunnels and passenger areas in key subway stations across New York City to meet 21st century urban infrastructure needs.