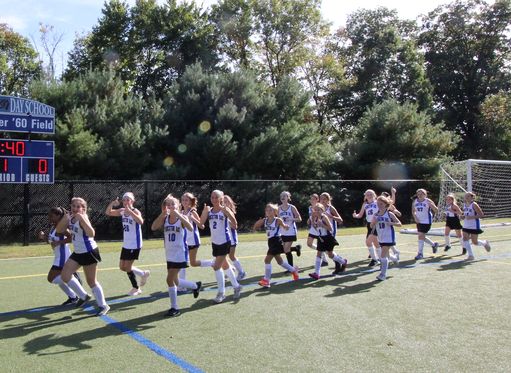 Fall Weekend kicked off last Friday afternoon with the Upper School Pep Rally, which featured the Fall sports teams and a thrilling dance battle between US contenders. The gym was filled with energy as the students got ready for the coming battle with Lawrenceville Prep. As school ended and the energized Upper School students filed out of the gym, many made their way over to the sports fields to cheer on their younger counterparts. A slew of Middle School teams, including field hockey, soccer, cross country, tennis and volleyball, took on various opponents across the Princeton Day School campus.

"Friday provided a wonderful opportunity for our MS teams and athletes to showcase their many talents in front of the entire community. The sidelines were filled with faculty, parents and many of our US athletes there to cheer on our MS teams" said Director of Middle School Athletics Scott Bertoli.

As the Panthers battled it out on the field, court, or course, they were continuously supported by their loud and proud fans. As the contests came to an end, the athletes and their fans all gathered on Pagoda field to enjoy some music, food and fun with the amazing PDS community. Below are some photo highlights from the Middle School games!

On Saturday, the roles were reversed; the Upper School athletes took the field against traditional rival Lawrenceville while the PDS community came out in full strength to support them. The weather was the best it has been in years, with the temperature reaching the 80's and sun shining non-stop. Even if community members couldn't make it to campus, they were still able to watch the soccer games via Play by Play's livestream.

The PDS Boys Soccer and Girls Soccer teams enjoyed epic games, even as Field Hockey and Girls Tennis battled hard but did not achieve the outcomes they were hoping for, losing 1-5 and 1-4 respectively. Girls Soccer, who has only lost one game this season, came away with a 2-0 victory that places them in contention for the number one seed in the Mercer County Tournament. Additionally, Boys Soccer broke their four-game losing streak and defeated Lawrenceville 3-2. While Volleyball dropped 0-2 in their match, they played a hard-fought second set that left them just a few points short. Finally, Cross Country's Meghan Rentner won the dual meet (boys and girls combined teams) with a time of 21:09.

Director of Upper School Athletics Tim Williams thoroughly enjoyed this year's first combined Middle and Upper School Fall Weekend schedule: "It was great to have the whole school community together for two fun days of games and activities. The weather was excellent and everyone had a great time cheering on their Panthers. That's what Fall Weekend is all about!" Below are some highlights from the Upper School games.