The End of an Era

On Princeton Day School’s website, we promise opportunities of a lifetime, every day. And though it is true that each member of the PDS community has his or her own unique opportunities and experiences during their time here, there are some special relationships and traditions that are shared universally. One of them is the wonderful nourishment that is provided by our kitchen staff—and this does not only apply to the delicious food. In the Campus Center, at the snack bar, and at special events like Alumni Weekend, the familiar and friendly faces of our kitchen staff abound—faces we all know and appreciate. It is these relationships that also bind us together as a community.

At the end of this past year, our community came together to bid farewell to three long-serving and enormously beloved members of our kitchen staff: Marie Kennedy, Irene Handeland, and Betty Snead. I spoke with Director of FLIK Food Services at Princeton Day School, Brian Mochnal, about the legendary ladies, and about the undeniable importance of the school’s commitment to feed the bodies and souls of its community.

Mr. Mochnal, who came to PDS in 2005, noted that when he arrived it was made very clear to him by the administration that there was incredible loyalty to the kitchen staff at the school, many of whom had served faithfully for decades. Though PDS had used different food service providers before, including Sodexo, the philosophy was to change the food service but not the staff. “I remember Cindy Stadulis (then Business & Finance Director) telling me that there was commitment from staff to school and from school to staff. The kitchen staff was not Sodexo or FLIK employees, but rather PDS employees.” Mr. Mochnal got the message and when he took over the management of the kitchen, the entire staff, except for two, remained. 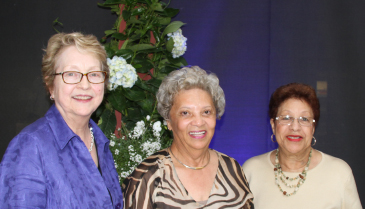 At the end of year celebration honoring our departing staff and faculty in June, Head of School Paul Stellato delivered remarks briefly detailing the PDS careers of Marie, Irene, and Betty. It was a full house, and there was both laughter and sniffles as the group gave a standing ovation to each of these esteemed members of our community.

After speaking about each, Mr. Stellato said in wonderful summary, “Marie, Betty and Irene are pillars of the PDS community and will be sorely missed by their coworkers, faculty/staff, students and alumni. During their time here, they could be found at hockey games, working the post-prom party, judging the Halloween contests, dancing to Feliz Navidad at Christmas, reading to Lower School students, cooking at the alumni picnic and many other activities. They have a genuine love for the school and for the students. They have all expressed how much they will miss the community and we know how much the community will miss them.”

Excerpts of the remarks delivered by Head of School Paul Stellato at the end of year celebration honoring departing faculty and staff on June 9, 2016.
Emma Marie Kennedy began working at PDS when she moved to New Jersey in 1971. Doug McClure was the head of school, Richard Nixon was President and the Princeton Country Day/Miss Fines merger was still young at only six years old.

Her first position was working the snack bar. At that time, the snack bar was a cart that would be wheeled down to the middle school at recess time and then returned to its home in the hallway.

Two years later she was in charge of the faculty dining room; yes, there was at one time a separate room for faculty to have lunch! Marie says that this private dining room is a fond memory for many returning faculty.

Soon after that, Marie became the manager of the kitchen, a position she held for many years.

Marie has covered every job in the kitchen concluding with “Mama Maria’s” pizzeria.

A trove of PDS history, Marie can recall everything from the different renovations that have occurred to the variety of for whom she has worked administrations. She was not only here for many of our current faculty alumni, but has also gone full circle and served their children as well.

Marie loves working the barbecue at Alumni Weekend to see all of the past students and, judging by their reactions, they love seeing her.

Entering retirement with Ed, her husband of more than 50 years, Marie looks forward to spending time at the Lawrence senior center, playing bingo, going to Atlantic City and doing the electric slide.

Betty Snead came to PDS in December of 1986. Her friend Marie Kennedy was running the kitchen and her brother Willie had been working at the school since before the Princeton Country Day/Miss Fine’s merger.

Betty had spent 17 years working at the Princeton Nursing Home before coming to PDS.

Marie must have known the right spot for Betty, because she was hired to work the salad bar, the same position she held for 28 years.

Betty is the first face you see when you come into the dining hall, and because of that she is the one that people go to with questions. At Betty’s 20-year anniversary, then Head of School Judy Fox remarked that Betty was her confidante when looking for hot peppers.

True to form, Betty will be spending her retirement in service to others. She will be volunteering at the Trenton food bank and also sitting with sick patients.

Irene Handeland came to America from Kristian, Norway as a newlywed at the age of 22. After being a stay-at-home mother for many years, she decided to look for a job in September 1986. She came to PDS and interviewed with the manager of the kitchen, Marie Kennedy. She was then hired to the spot that she has occupied for nearly 30 years, the snack bar.

Irene has witnessed the snack bar progression from a cart in a hallway, to the current home it occupies.

What does Irene mean to the students? She is one of the first choices to be Halloween judge each year. Young alumni stop at the snack bar first when coming back to school to see Irene, including a recent visit from Miami Hurricane star Davon Reed ’13 who gave her an autograph on request.

How much do alumni love Irene? They have a Facebook page dedicated to her and her legendary cookies.

In retirement, Irene is looking forward to traveling with her husband and spending time with her two grandchildren.

Deb Walters Announces Retirement After 15 years at PDS in September

At the start of the new school year, just as the community was adjusting to not having Marie, Irene, and Betty around, Head of School Paul Stellato had to make the devastating announcement that Deb Walters was also retiring in September.

“Deb Walters has worked at PDS since 2001, after working for 15 years at Pingry. Deb is leaving PDS to move to Massachusetts to be near her daughter and her beloved three grandchildren. She is preparing a resume for the first time and I was able to see a few opening lines from her introduction:

‘I provide excellent customer service and enjoy interacting with the students, faculty, and staff. I am a dedicated food service worker, like the fast pace of the day, and work well independently as well as with a team.’

I think this should read:

‘I provide the type of customer service that makes a person feel like they are a family member. I will ask how your family is and I am honestly interested in the answer. I will grieve with you when you are sad and embrace your successes as if they are my own. I take pride in my work and it is important to me to properly nourish you, just as I would any family member.’

Deb, we will miss the great service you have offered us at PDS. You know the preferences of every deli customer and no interaction at your deli would be complete without at least one ‘Honey’ and one ‘Sweetie.’ Thank you from all of us and congratulations on having the opportunity to be near your family.”